Peter Morin is a Tahltan Nation artist, curator and writer.  He recently relocated from British Columbia to Brandon, Manitoba where he joined the Visual and Aboriginal Arts Faculty at Brandon University. In both his artistic practice and as his curatorial work Morin investigates the impact between indigenous cultural-based practices and western settler colonialism. This work is defined by Tahltan Nation epistemological production and takes the form of performance interventions. Morin has participated in numerous group and solo exhibitions including Team Diversity Bannock and the World’s Largest Bannock attempt (2005), A return to the place where God outstretched his hand (2007); 12 Making Objects AKA First Nations DADA (12 Indigenous Interventions) (2009); Peter Morin’s Museum (2011); Peter Morin’s Ceremony Experiments 1 through 8 Circle (2013). In addition to his art making and performance-based practice, Morin has curated exhibitions at the Museum of Anthropology, Western Front, Bill Reid Gallery, and Yukon Art Centre. In 2016, Morin was the recipient of the Hnatshyn Found Mid-Career Award for outstanding achievement as an artist. 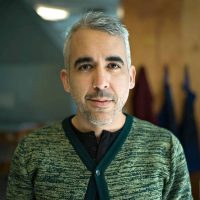