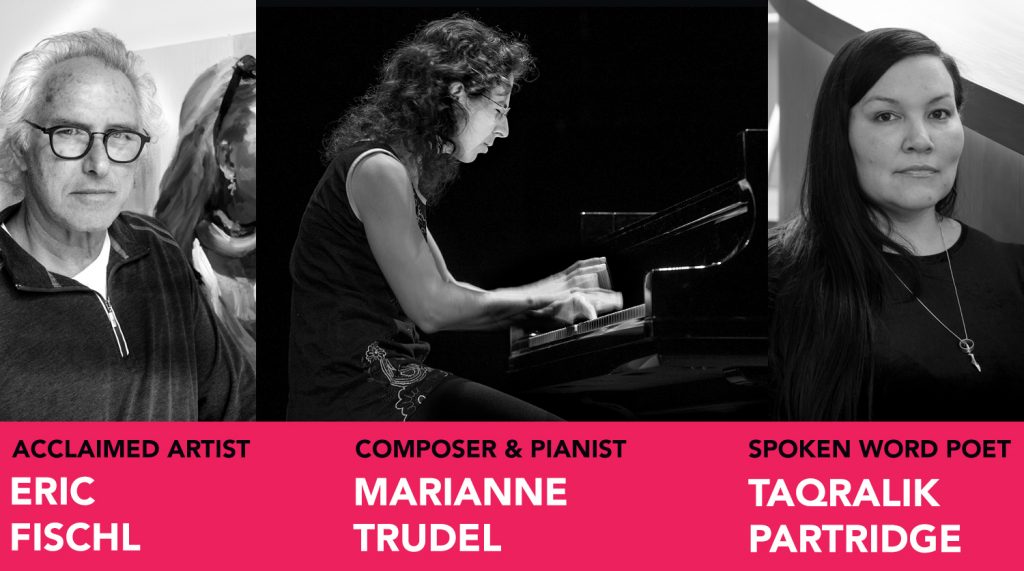 Concert by Marianne Trudel and the Guelph Symphony Orchestra

—from “after an argument” Taqralik Partridge

With the warm ring of the spoken word at their center, Partridge’s poems wrestle with colonisation and racial violence while also reflecting rich sensory imagery—from the stain of blueberries, to the relationships of sisters and aunts, to a knowledge of the land. Partridge’s debut poetry collection was launched at the Guelph Lecture—On Being by Publication Studio Guelph, with copies available for sale at the River Run Centre in Canada Company Hall.

As part of Musagetes’ Thread Residency program, Partridge’s curated exhibition of photographs, Qautamaat, opened at the Art Gallery of Guelph on Wednesday, January 22nd as part of the festival (see page 20). Including photos from 12 artists, the exhibit documents places and phenomena of daily life, offering a visual map and memory of the lived environment in Inuit Nunangat and in urban centres further South.

Keynote: In Conversation with Eric Fischl

Eric Fischl is an internationally acclaimed painter and sculptor and one of the most important figurative painters working in the world today. His talk, “The Body: Its Uses and Abuses”, was a free-wheeling conversation about the way the body has been represented in art from the 19th century to the present, and what that representation tells us not only about art, but about the society in which we live and the values it holds. During the discussion, he showed images of his own painting, drawing and sculpture. Eric Fischl was in conversation with the writer and critic Robert Enright, who is Professor of Art Theory and Criticism in the School of Fine Art and Music at the University of Guelph.

In performance with the Guelph Symphony Orchestra, the Gryphon Singers, and others

With this piece, I was aiming for something luminous, something that fills the soul, brimming over and radiant, like the Laurentides Park in the middle of winter, under the sun, with the evergreens draped in snow.

In the middle of this forest, suddenly: silence. The silence that takes hold and fills the soul with profound joy. Suddenly, completely: we let down our guard.

Body, heart, and spirit are reunited. With both feet planted in the silence, we can breathe again. At long last.

Experiencing silence has become a rarity. Yet, as much as oxygen and water, human beings need silence. Why so much noise? What is hiding behind this wall of sound?

At the heart of silence: light. Manifesto for a quieter soundtrack.

This performance was the culmination of the 2019-20 Improviser-in-Residence program, a joint initiative of the International Institute for Critical Studies in Improvisation (IICSI) and Musagetes.