To improve public policy in the Circumpolar Arctic, the Canada Centre for Global Security Studies at the Munk School of Global Affairs (UofT) and the Walter & Duncan Gordon Foundation have partnered on a four-year multi-dimensional international Arctic Security program.

A goal of this Program is not only to carry out original research on Arctic security related issues, but to make research about the Arctic more accessible for the interested. They do so by hosting a number of public events, including a speaker series the first Thursday of the month at the Munk School of Global Affairs; dialogues in the North that bring together Northerners and academics to encourage mutual learning and exchanges; and conferences designed to address the challenges and opportunities facing the Circumpolar Arctic.

The vision of this partnership is for peacefully-resolved disputes in the Arctic, global environmental security that supports a healthy Arctic environment, and an Arctic foreign policy that centres on the needs of those who live there.

To help influence this agenda, the Arctic Security Program has created policy groups, all co-chaired by prominent indigenous leaders from the North, that study public opinion, the Arctic Council, Arctic Peoples and their perceptions of security, and emergency management. This research is complemented by a public outreach and education campaign centred on annual conferences, dialogues in the North and a monthly speaker series.

It is our belief that in order to influence public policy one needs three things:

Through their Arctic opinion survey, Rethinking the Top of the World, they seek to understand public opinion on Arctic issues in the Canadian North, Canada as a whole, and all of Canada’s Circumpolar neighbours (Denmark, Greenland, Iceland, Norway,Sweden, Finland, Russia, and the United States). Results of the survey last year show that the Canadians, in particular, regard the Arctic Council as a means to maintain peace and stability in the Arctic and to enhance cooperation. Yet, the respondents were not united over the question as to whether military security should be covered by the Arctic Council. Knowledge about the Arctic Council, however, is greatest in Canada and the Nordic Countries, while amongst the US respondents only 2 percent had heard about its existence.

In short, the Arctic Council is a high-level intergovernmental forum of the Arctic states and six Indigenous peoples’ organizations. With the Arctic increasingly the focus of international attention, the Arctic Council is now viewed as the main forum for dis-cussing Arctic issues. However, questions abound. How should this intergovernmental forum develop? Should it be more active? Should its mandate be expanded? How should its internal structure be organized? Should non-Arctic states have a place at the table? How might Canada handle these questions when it takes over the chair in 2013? These questions and more will be examined in a report called The Arctic Council: its place in the future of Arctic governance.

A further study called Hoping for the Best; Planning for the Worst: Evaluating Emergency Management in the Arctic, recognizes that the Indigenous and Northern peoples, who have traditionally provided search and rescue or first response to emergencies in a spirit of great selflessness and generosity, are being challenged beyond the scope of their resources and capacity to assist in crisis situations. These situations are being precipitated by rapid global warming that is making the Arctic more accessible to tourists, businesses, and shipping, while at the same time challenging the traditional way of the life of the region’s inhabitants. This study seeks to evaluate emergency management procedures in the Arctic and offers suggestions for their improvement based on the practical expertise of those who live there. 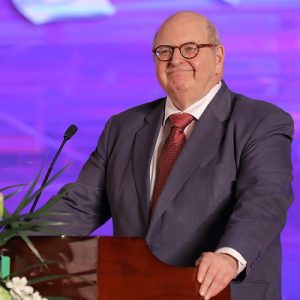 Thomas S. Axworthy has had a distinguished career in government, academia, and philanthropy. He served as the Principal Secretary to Prime Minister Pierre Trudeau, and he was a key strategist on repatriation of the Constitution and the Charter of Rights and Freedoms. From 2009 to 2015, Dr. Axworthy was president and CEO of The Gordon Foundation, an institution known for its partnership with Northern indigenous leaders in helping to create the Arctic Council. He is the author of numerous books and articles of which the best known is Towards a Just Society, co-authored with Pierre Trudeau.