Throughout my experience of the 2018 ArtsEverywhere Festival, a thread of groundedness, the importance of space and place, wove its way through each event. Various speakers, artists, and presenters emphasized that by consciously recognising where we live and where we come from, we are free to manifest more fulfilled versions of ourselves. Michael Roberson’s “Big Ideas in Art and Culture” lecture focused on the liberation of transgender people of colour through House|Ball culture and a recognition of history and community across time and place. In the “Meaning or Movement? Objects or Rhythm?” panel discussion, an awareness of place was once again a central thread, in Zab Maboungou’s dancing and the art of Maikoiyo Alley-Barnes and Ashon Crawley. Through the acknowledgement of our histories and our current spaces, we can grow while remaining connected to our roots and the foundations of ourselves. Finally, in the “Braiding Infinity” conversation, it was clear that we must be mindful of where we come from and where we are now as settlers, immigrants, or indigenous peoples on this land that we now call Canada. Over the course of the ArtsEverywhere Festival, I have learned that the act of grounding ourselves allows us to experience our histories, our current situations which affect all of us, and the possibilities for our collective futures. By being grounded and remaining conscious of the positions of those around us as well as our histories, we can coexist as a community, liberating us to become the most authentic versions of who we are.

I had the privilege of spending a good part of four days this past week at the ArtsEverywhere Festival. I was so impressed to see that the City of Guelph and partners provided the venues for this event and that Musagetes is in this city helping us to learn about the marginalized in Canada and in our global community and to hear about and explore pathways to greater tolerance and inclusivity. The calibre of speakers at the festival is outstanding. They are amazing teachers and facilitators enabling their audiences to see, hear and feel new ways of being. As one of the invited emerging scholars, whose area of study is studio art, I was struck by the many ways that Musagetes promotes connection across culture, race, and gender with the spoken word, question and answer, and opportunities for informal sharing over a meal, music, dance, and lecture. I much appreciate the opportunity for the sharing of ideas on art projects with one of the Musagetes facilitators and was very impressed with his comments on my proposed project that is in the realm of Art as Activism as well as his thoughtful comments on another student’s work. There has been a shift in my perspective on my next project. I fully expect that the experiences of this past week will continue to resonate with me in the coming months.

For four days the Arts Everywhere Festival expanded the community of Guelph beyond our regional borders by inviting guests from across the globe to discuss a broad range of topics. While presenters can claim origins from Australia through Zimbabwe, hitting stops in between such as Brooklyn, Korea, Portugal and the Southern States, I was most struck by the impact this weekend might have on our local community. Certainly a night spent reviewing how the Trans community set the standard for pride (Thursday), or one in which we consider Canada’s dark legacy regarding education for Indigenous children (Friday), followed by the Canadian premiere of a p’ansori concert makes for a well-spent weekend by any cultural standard. However as I attended the events of the festival thanks to the Emerging Scholars program, the greatest impact stemmed from the opportunity to observe local community dynamics.

The festival enlivened spaces such as the Art Gallery of Guelph and The River Run Centre. The conversations kept these community hubs vibrant and gave local participants a chance to engage in world-class conversation.

There was graciousness in the interactions between Peter Schuler from the Mississaugas of the Credit First Nation and Michael Roberson from Brooklyn’s House Ball scene.

There were challenging truths to be heard as Dolleen Tisawii’ashii Manning and Amanda Cachia called upon us to consider the accessibility of cultural institutions such as our galleries and universities. 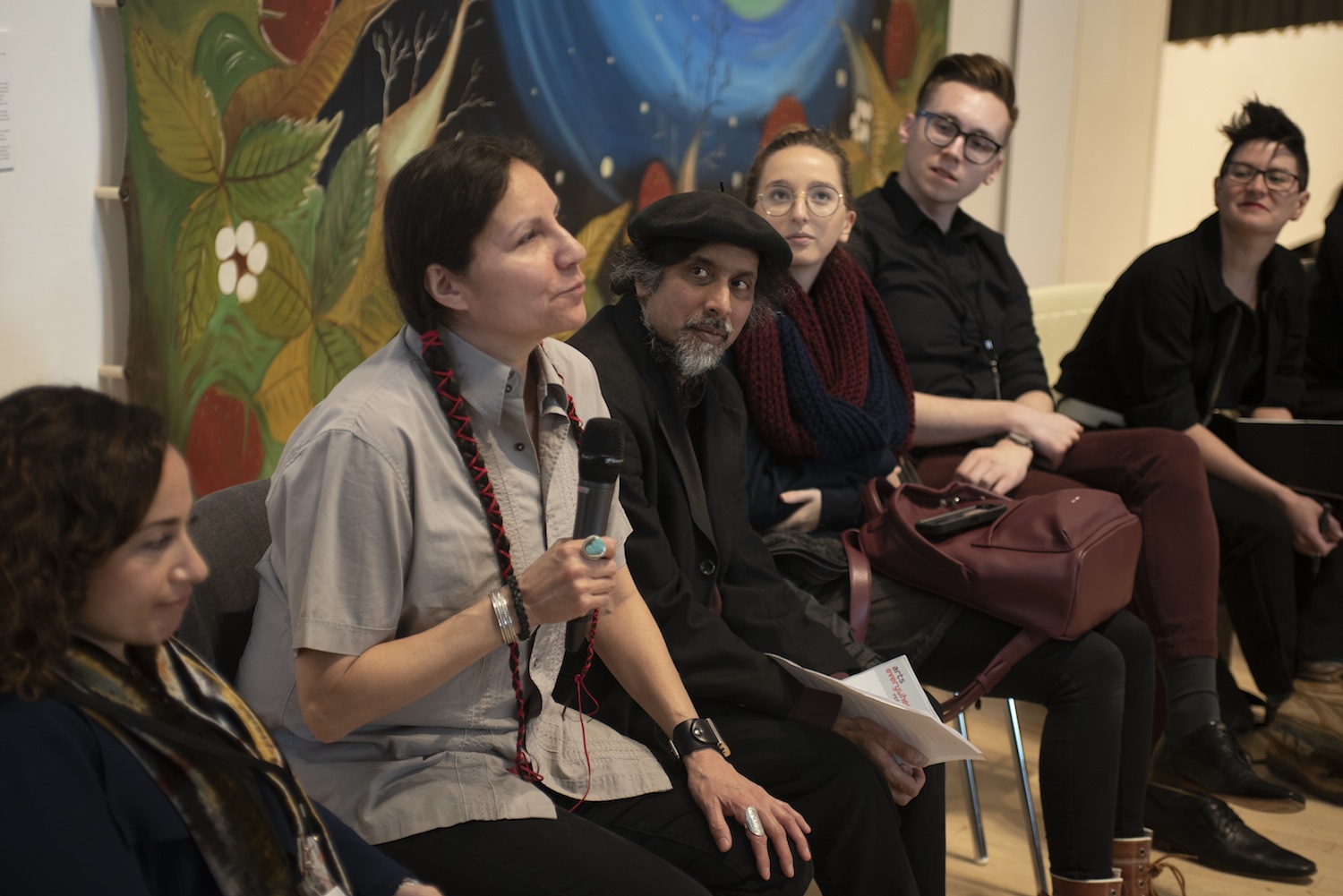 There were connections to be made as the participants of the “Meaning or Movement? Objects or Rhythm?” panel confronted the possibilities of embodying understanding.

At the “Braiding Infinity” panel strong lessons were shared about the importance of patience in communication. The interactions there exemplified that whether we are waiting for someone to receive our message, as Indigenous communities wait on colonial attitudes to change, or whether we are heeding the words of an elder, patience can be a sustaining solution for frustrating miscommunication.

At Saturday night’s event we were reminded of nature’s ability to provide inspiration as well as sustenance. As I walked home that evening from the River Run Centre to my house in the Ward, I felt exhausted, as if I was literally carrying all these heavy, sometimes hard, truths. How would I, as a musician and as a researcher, incorporate these lessons? I felt small in comparison to the magnitude of the lived experiences I had just witnessed over three days. My streets felt small. My house felt small.

What a perfect ending then was the workshop on Embodying Radical Tenderness led by Dani d’Emilia. Here the heavy lessons of the weekend, empowering and overwhelming, were put into perspective as we were invited to explore practices of understanding, compassion, and trust building through sensorial experiences. As we sat with discomfort, practiced active listening, reflected and celebrated each other, I was reconnected with my own capacity. Left with a sense of agency I was able to see how the events of the weekend contributed to the ongoing evolution of our community, whose borders continue to expand.

The ArtsEverywhere Festival was an incredible environment to be able to learn about arts and culture within the Canadian context. The festival started with an amazing and charismatic speech by Michael Roberson titled “The Trans Sounds of Black Freedom” which not only made the audience think and feel through music and dance but also started an insightful and open discussion about race, sexuality, and dance culture in Toronto. Another event that personally made an impact was the “Art as Activism / Activism as Art” discussion with Amanda Cachia and Dolleen Manning. With two different lived experiences and art practices, Cachia being a curator and Manning an artist, it was interesting to first learn about their passion for the arts and about their particular work, but also to hear them answer the same questions. This allowed the audience to not only learn about their experiences, but also how to make sure that space is given to all people within the arts and culture industry.

As a student of art history in hopes of being within the industry, the private breakfast with the other emerging scholars and all people involved with the festival was one of the most important events. During this breakfast I was able to discuss and ask questions to various presenters and have a more in-depth conversation about various issues, opportunities, and experiences. This was an amazing way to not only meet new people, but also network. I am incredibly grateful for the opportunity that being an emerging scholar this year has allowed me to participate in.

The Ways in Which We Learn

Conversations have the ability to transcend the way we think, not only as individuals, but whole communities as well. They take many different forms and can lead us in many different paths, but I think for the most part all conversations allow us to better understand distinguishing marks of human nature. Musagetes’ ArtsEverywhere Festival embodied the many complexities of conversation.

After attending the ArtsEverywhere lectures, conversations, and performances I can undoubtably see how seemingly complex the act of having a conversation can be. Before the weekend, I assumed having an open discussion was the only form of having a conversation; where each person has a chance to speak their minds and contribute to what is being said. This was definitely spotted at the festival’s Kick-off Concert at the eBar downtown on Thursday, as each individual brought themselves onto the dance floor and added to the collective movement. We can educate through dance and dance to educate, and as Zab Maboungou said at the “Meaning or Movement” conversation on Friday at the Boarding House Gallery, “you don’t follow the drum, you converse with it.”

Although discussion is extremely important and beneficial to have, it’s not the only type of conversation. At that same talk, we stumbled upon a realization as the speakers opened to the audience for questions. Maikoiyo Alley-Barnes spoke about the value in actively listening, which struck a chord with me—most likely because it was the first time I really thought about the role listeners play in a conversation. When we are a part of a discussion, we are often negotiating with ourselves and cannot completely connect to what is being said since we are constantly debating with an inner dialog. But when we think about the real impacts that listening has, we can only imagine how the conversation and knowledge gained can spread outside of that space. 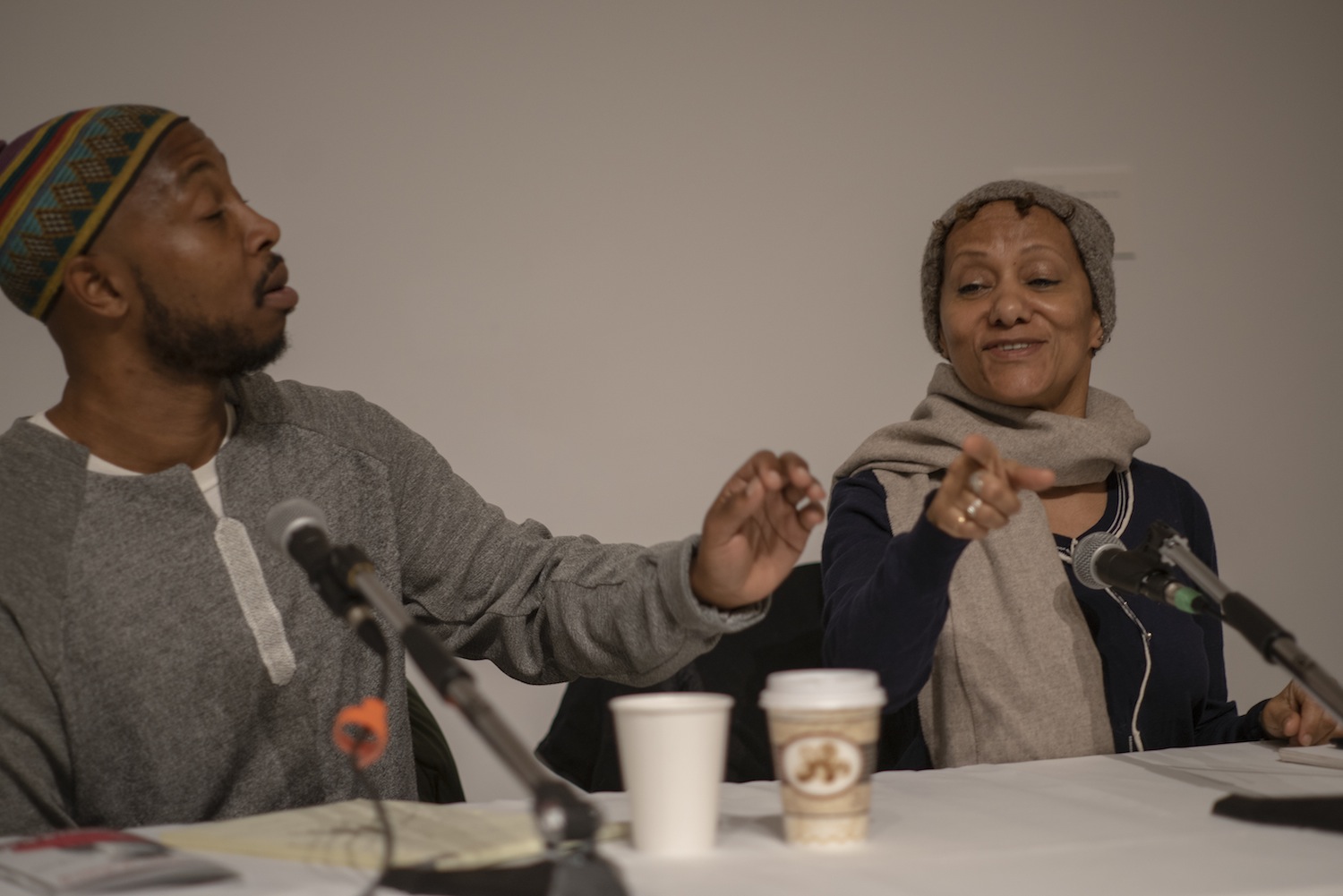 When we are so eager to speak our own mind, we can often miss the meaning for which the conversation first began. At the “Art as Activism” talk at the Art Gallery of Guelph, Dolleen Tisawii’ashii Manning made a note about how we can learn through recognizing how others do, and addressed the triangular pattern that geese fly in. It may seem like a silly thing to bring up, but Dolleen pointed out how the strongest is responsible for leading the team since they have the hardest job, but once they become too tired to lead, they cycle to the back where they can regain their strength and another will take its place. This example of managing power can potentially change how we think about our universal model. Sometimes we need to look outside of our own selves to find a better solution.

So my overall take away is that communication does not have to consist of speaking, we can exchange ideas through dance, observation, and actively listening to one another. The ArtsEverywhere Festival gave our community a platform to practice just this.