Since giving the Guelph Lecture—On Being Canadian in 2007, David Buckland of Cape Farewell in the UK has started the Cape Farewell Foundation in Canada. An artist himself (photographer, designer and filmmaker), with photos collected by the Metropolitan Museum in New Georges Pompidou in Paris and the National Portrait Gallery in London, England, Buckland is the Founder and International Director of Cape Farewell. He has since worked with some of Canada’s best artists including Leslie Feist, Yann Martel, Martha Wainwright and Brian Jungen. 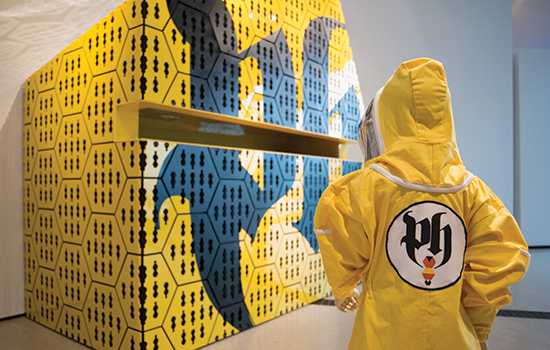 Continuing to press for Canada’s unique role and responsibility in the fight against climate change, Buckland has launched one of his most impressive efforts: Carbon 14: Climate is Culture exhibition and festival. This visionary and powerful four-month cultural engagement has at its centre a major exhibition, showing at the Royal Ontario Museum until February 2, 2014. The exhibition, curated by David Buckland and Claire Sykes, includes bold collaborative projects by Zacharias Kunuk and lan Mauro, Myfanwy MacLeod and Janna Levitt, Mel Chin, Lisa Steele and Kim Tomczak, Sharon Switzer, Minerva Cuevas, Melanie Gilligan and Tom Ackers, Donald Weber, David Buckland and Tom Rand, and Jaco Ishulutaq.

The festival also featured The Trial of David Suzuki on the charge of seditious libel. This unique theatrical event, created by Laurie Brown in partnership with David Donnelly of Donnelly Law, debated Suzuki’s Carbon Manifesto, which he announced on October 9. The Manifesto calls for the end of fossil fuels as a primary energy source; the protection of Canada’s Boreal forest and oceans; a move to ensure 70 percent of the energy we consume is renewable within one generation; a carbon tax of $150 per tonne, effective immediately; and that Canadian climate scientists must be able to share their findings uncensored and unimpeded by political or corporate interests.

As part of the festival, closer to home, CIGI in Kitchener will host Buckland on December 4 for a talk on our response to the climate challenge, which he insists can be beneficial to both our collective health and our economic future.

Buckland talks about the process to produce this unique exhibition: “In November 2011, on the shores of Lake Ontario, we invited 25 North American visual artists, filmmakers, musicians, writers and advertising directors to gather in Toronto to interrogate eight informers drawn from across the professional spectrum of climate engagement—climate scientists, economists, new energy technologists and social scientists—on the facts of climate change. The ask from the creative minds was to engage, and through a process of action-based research, make artworks, plays, music and poetry that would form the basis of an exhibition at the ROM. Two years later, they have triumphed! Fourteen collaborative works will be presented as part of the Carbon 14: Climate is Culture exhibition and surrounding festival.”

The Carbon 14: Climate is Culture festival is a world first. Buckland believes Canada is unique in all the major western economies trying to grapple with the challenge of climate change in that it has an important part of its population, the Inuit, whose culture is directly affected by our warming planet. “Their voice is central to the Climate festival; they live their lives inside the debate and give real insight to what that means and how it is something that could well be all our futures.”

As Clair Sykes, Co-Curator and Programming Director for Cape Farewell Foundation says, “Confronting the facts around global climate change, the artists participating in Carbon 14: Climate is Culture are all responding to different aspects of this climate challenge, in poignant, nuanced, subversive, often humorous, and always passionately human ways. Subjects include explorations of a changing Arctic, the health of the oceans, bio-diversity and extinction, sustainability and new, clean technologies; and centrally questions of politics, economics and ethics.”