Our emcee at the 2004 Guelph Lecture—On Being Canadian was Annamie Paul, who more recently ran as the Federal leader of the Green Party. After introductions, Timothy Findley’s longtime partner William Whitehead read selections for Findley’s A Nation of One, which was followed by a presentation from 17 year old refugee Mading Angeth. The audience was then treated to a set of live music from local band House of Velvet before intermission. The keynote speaker for the evening was journalist Alexandre Trudeau, who had just completed his second feature length documentary The Fence, which saw him living with two families on either side of the newly erected security barrier between Israeli and Palestinian territories. 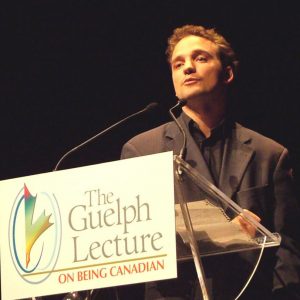 Alexandre Trudeau graduated in philosophy from McGill University with a specialization in modern post-metaphysical thought. After his studies, Alexandre went on to co-direct an experimental project on the Liberian civil war titled Liberia. The Secret War, which deconstructs the obscure and terrifying crisis into three contrasting perspectives: the war’s media significance, its geopolitical underpinnings, and finally its spiritual connotations.

From 1998 to 2000, Alexandre worked as a videographer and reporter on the bilingual CBC Newsworld/RDI program Culture Shock. In his reports, he focused mainly on Canadian Aboriginal issues. In 2000, Alexandre reported on the democratic hopes and despairs of the Yugoslavian youth caught between the machinations and sanctions of the West and the escalating tyranny of Slobodan Milosevic. His report aired on CBC’s The National Magazine. In 2003, Alexandre produced and directed his first full length documentary Embedded in Baghdad. Shot over six weeks during the U.S. led war on Iraq, Embedded is the intimate journal of the filmmaker living with a middle-class Iraqi family. The film explores the true meaning of the war for those civilians caught at its epicentre. Produced in 2004, The Fence is Alexandre’s second documentary.  It revisits the experience of Embedded in Baghdad whereby the filmmaker tells his story from within an intimate family context. In this case however, Alexandre is embedded with two families on opposing sides of the newly erected security barrier between Israel and the Palestinian territories. 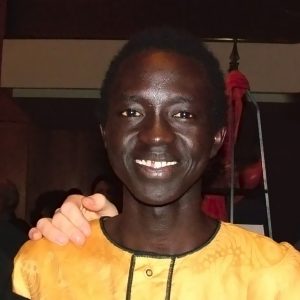 17-year-old Mading Angeth was born in a small village in southern Sudan. When the hostilities reached his rural community, he fled to Kenya where he lived in Kakuma refugee camp. Even in the camp, life wasn’t stable: refugees were still attacked by the local people; so Mading was sponsored as a convention refugee by the Canadian government to come and build a life here in Canada. He arrived on April 22, 2001 and started school in New Westminster, BC. This year he won a scholarship to Lester B. Pearson College of the Pacific, a United World College, where he is studying Economics, Anthropology, English, Math, French, Theory of Knowledge and Biology. 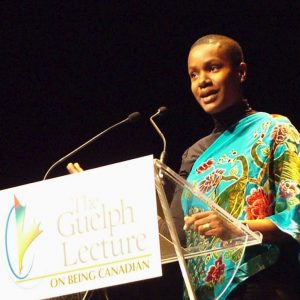 Annamie Paul is the Founder and Director of the Canadian Centre for Political Leadership (CCPL). The CCPL provides women, visible minorities and Aboriginal peoples with non-partisan training and resources to help them successfully pursue public office. The goal of the CCPL is to increase the political representation of these groups in Canadian politics.

Annamie is also the first Canadian to be granted an Echoing Green Public Service Fellowship from the American Echoing Green Foundation. The Fellowship provides seed money and technical support to emerging social entrepreneurs to support innovative public service initiatives. She is also an inaugural member of the Action Canada Fellowship. Action Canada is a national fellowship that provides programming focusing on leadership development and public policy projects of significance to Canada.

Annamie is a graduate from the University of Ottawa (Bachelor of Law) and the Woodrow Wilson School at Princeton (Master of Public Administration). William Whitehead and Timothy Findley have been icons of the Canadian documentary, literary, and theatrical scene almost since the day they met in 1962. Bill pursued a career in the theatre and as a documentary writer. His work involved every producer in CBC’s Arts, Music and Science areas, the National Film Board of Canada, TV Ontario, and private producers such as Atlantis. By 1987, Bill was withdrawing from documentary work: he sensed the need to devote all his working hours to what he calls “the Findley industry.”

Timothy Findley died in 2002, and Canada lost one of its most illustrious writers. His novels include The Wars, The Piano Man’s Daughter, The Telling of Lies, Not Wanted on the Voyage, and Pilgrim. He received many awards and honours, including honourary doctorates (one from the University of Guelph) and the Order of Ontario. He was an Officer of the Order of Canada and Chevalier de l’Ordre des Arts et des Letters. Findley’s writing has been widely translated, and our country is better known abroad because of his work. Bill continues to run their company, Pebble Productions Inc., and to manage Tiff’s literary estate.

The University of Guelph Library’s extensive theatre collection has grown richer with the donation of Timothy Findley’s personal collection of theatre memorabilia.

Guelph’s very own groove masters, House of Velvet, burst on to the scene in the early ‘90s. Right from the start, critics raved over them and pointed out that while they are immersed in reggae, jazz, hip hop, mambo, dancehall and a variety of African styles, they rise above cultural and geographic expectations about where those genres of music can exist. Their first CD, Doors Wide Open, was released in 1997 and was called “one of the most intriguing independent albums of the year.” Their second album, Our Time, is house-rocking with rhythm to spare—then flows with mood and gentle percussion.